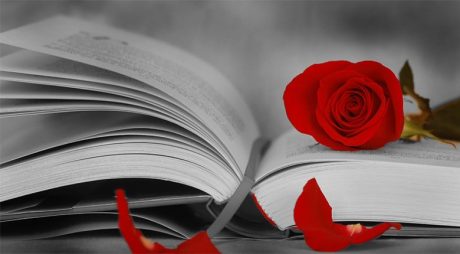 St.George, the day of the rose and the book (c) Gencat.cat

Legend tells it that, a long time ago, in Catalonia lived a dragon that had frightened all its inhabitants. The hungry and ruthless dragon used to fly over the small towns annihilating their cattle and even, sometimes, devouring some child that crossed their path. Nothing and nobody was able to face him; there was no way to end so much misery.

The animals were disappearing under the claws of the fierce and soulless dragon, to such an extent that there was no other way to satisfy the wishes of the beast and human sacrifices had to be raised.

So that the King had no choice but to summon the people to make a draw in which all, nobles and vassals alike, would be sacrificed one by one to keep the appetite of the dragon stabilized.

It was time for the draw and, to everyone’s surprise, the first person to be sacrificed was the Princess of Catalonia, the daughter of the King. His Majesty the King, a righteous man with his people, sad and desolate, ordered that they take the princess to the place where she was to be delivered to the dragon. The princess, frightened, did not protest and accepted that the sacrifice was necessary for the good of her beloved kingdom. The people cried disconsolately watching one of the most beloved beings of the reign depart, helpless, sad, terrified.

The time came, there seemed to be no turning back, the dragon sharpened its fangs, the prey was ready and prepared. But at that moment, on the horizon, appeared a rider mounted on a beautiful horse, which was fast and fast to the place where the dragon was going to carry out the greatest sacrifice that was remembered in the reign.

It was the knight George, a brave and intrepid warrior from the northern lands, ready to fight the dragon and free the princess from his claws. The battle was cruel and fierce, but finally George, with his spear, managed to reach the heart of the dragon, who died bled.

They say that from the blood of the dragon a rose grew, and that George approached him, plucked a rose, and gave it to the princess, who freed and moved, surrendered to the arms of the brave warrior who had just served her and his beloved people.

After the years, the princess left her memories in a book that was passed from hand to hand, from generation to generation, until today, in which we continue to remember this story, a story of courage, courage and solidarity, a story of love, the story of St.George.

On April 23, we all remember our hero St.George, and in his honor the ladies give a book to their esteemed men and the gentlemen give a rose to their beloved women.