The word CALL comes from the Hebrew קָהָל Qahal (Community), may be influenced by Latin (callis: passage between two walls estrello) is the word used in Catalonia to name the various Jewish neighborhoods. And it corresponds to the word JUDERIA in Spanish.
In a document dating from the year 888, refers to the presence in Girona of about 25 families of Mosaic religion.
The Call of Gerona housed one of the most important Jewish communities in the West at the time and is currently the best preserved in Europe.
It began to be formed from the 12th century, in the street of Força (Fuerza), when Jewish families living around the Cathedral settled down. There an average of 800 people lived.
In the city came to live great personalities from various cultural fields, developed their theories important thinkers like Jacob Ben Sehet Gerondi, the poet Mesula Ben Selomo de Piera. And the great philosophers Ezra Ben Salomo and Azriel de Gerona. Although the most relevant figure was the physician poet and philosopher and exegete Mosse ben Nahman, better known as Bonastruc ça Porta.
From the school of the Cabala of Gerona, the first group of Kabbalists came from the Iberian Peninsula until the first half of the 13th century.
In the summer of 1492 by the decree of expulsion of King Ferdinand, the Jewish community of Girona was forced to sell its synagogue and the other surrounding spaces. Thanks to the documents of sale kept in the archives, the location of this has been located in the space of the Bonastruc ça Porta Center, where the halls for the Jewish rite, the hospital and the baths had been, which were different spaces joined together , whose limits that are well defined have allowed the entire complex to be safely located. In the upper patio of the center there is a space that was known until recently as a cistern, where a team of archaeologists from the University of Gerona carried out an intervention in February 2014, appearing structures of medieval origin: a rectangular pool ( not a cistern) and a complex structure that, all this was covered between the 15th and 16th centuries, are the remains of the ritual bath or micvé, which the Jewish population of Gerona used from 1435 until the expulsion.
Thanks to the support of the Israeli embassy, ​​part of the call where the Bonastruc ça Porta center or the Nahmanides Studies Institute has been rehabilitated has been rehabilitated.
The current neighborhood only retains part of the medieval layout.
Like the rest of the old part of the city is considered of Cultural Interest.
Bibliography, Credits and mentions
Text and photographs owned by M. Carmen Diez Carrera. 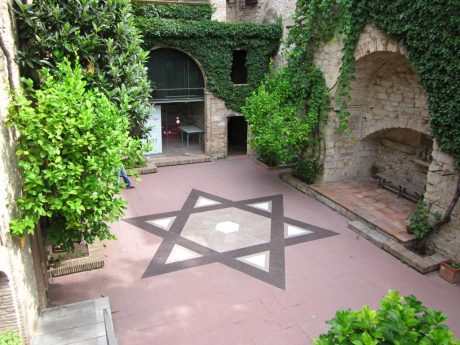