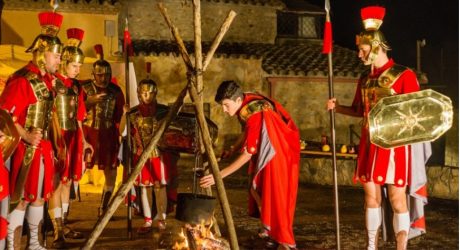 The Living Nativity Scene of Castell d’Aro was represented for the first time in the year 1959. The representation takes place between the medieval centre of Castell d’Aro (an area declared a National Heritage Site of Cultural Interest) and the nature area of the La Coma Valley. The combination of these two areas creates an incomparable setting for a show. The route is approximately 1.5 km. long, and takes about an hour.

The nativity scenes, after an initial representation, begin with scenes from the Old Testament with the participation of 300 actors. Afterwards, there are combined classic scenes that are common to many living nativity scenes: the annunciation, the house of Nazareth, the announcement of the census, the search for an inn, the journey to Bethlehem, the annunciation of the shepherds, the Kings, the birth place, etc.

But one of the special touches and what gives the Castell d’Aro Living Nativity Scene its own personality is the representation of some unique and surprising scenes based on the representation of craftwork and scenes referring to the countryside and peasantry: the farm, the bread oven, the charcoal burner, the chestnut vendor, the large market, work with wine and oil, the large mill, shepherds, hunters, washing women and many others.